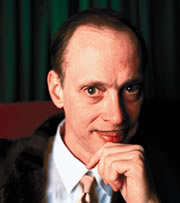 After a wonderful cricket-filled night at home with the Benfers and then tonight out with Aimee & Co., I will shuffle off to bed. But first, a random note: I took a trip down memory lane on my drive from Baltimore’s downtown. I used to read for a blind philosophy professor, Kingsley Price, who taught at Hopkins. He was friends with Suzanne Langer, who always wrote kind dedications in her books to him. However, Price was not always nice in private to me. He was particularly fond of mocking any music I listened to because he was a connoisseur (& a philosopher of music) while I was just an undergrad, who read for him and took him to the store. Mr. Price also used to live on the same street as John Waters. I was at a private party once (by accident, not by fame) with Mr. Waters at the B-Bar a few years back, and I thought very hard about asking him if he knew his neighbor, the not-so-nice philosopher. I didn’t. I wanted to mostly because Price pointed out Waters’ house to me on a walk one day, and I saw that same house and its owner on Lifestyles of the Rich and Famous. If Mr. Price knew where Waters lived, Waters must certainly know Price, who lived a few doors down. And I wanted the dirt. I wanted to commiserate. I left it alone.

I just tried to find out if Mr. Price is still alive. I don’t think so. He was up there in years when I worked for him. I was always torn between feeling bad that he was old and alone and feeling anger at his seeming disdain for what could only have appeared to be my simple-mindedness. Maybe I kept at it longer than pride should have allowed because I needed the money. The day I gave Kingsley notice, he appeared to be amused, almost surprised that I might have some other plan in the world. I was replaceable and barely warranted a “Good luck.” I don’t recall receiving even that. However there is no real regret in this recollection; I don’t regret refraining from telling the man how I thought “he did me wrong.” I don’t regret never seeing him again. I guess I think life is funny in that strange *and* laughable way, and Kingsley made me pause tonight to remember the younger woman I once was with her different abilities to write off what might seem unacceptable now as well as envy her more adventurous, careless behavior. Ahh, the late night sentimental mind…

Cest la vie, poetry remains words on a page, a state of grace, and a book of songs, so a bit more from David Larsen’s The Thorn to redeem the malicious parts of me:

Good night everywhere and everyone.