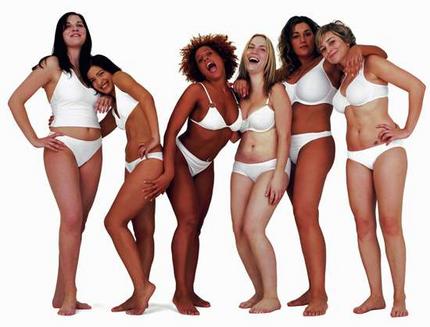 I was reading an article in The Week debating the pros & cons of Dove’s new ad campaign. The ads depict women who are not models and wear the dress sizes of average American women. The Week is pretty good about offering up a few different perspectives on each issue they decide to cover. One of the remarks struck a chord, especially today. Here is the excerpt:

In the long run, when people thumb through Glamour or Vogue, or glance up at a billboard, they don’t want “to feel as though they’ve stumbled into the ladies’ locker room, or caught their neighbors in their skivvies.” Hear, hear, said Richard Roeper in the Chicago Sun-Times. If I want to see plump posteriors and lardy legs, I can always visit my local shopping mall. “If that makes me sound superficial, shallow, and sexist–well, yes. I’m a man.”

Lovely. Richard Roeper’s snide response is naturalized in our culture, along with countless other similarly degrading comments on a daily basis. If I challenge his sweeping disdain for the female form in any way, I risk becoming the prude and proverbial bitch. This is not a question of first amendment rights. Of course Roeper has the right to make his statement, but if I exercise the same first amendment rights and question his statement, an anger flares that is quite revealing about the hierarchical pyramid of society today. No one likes authority to be challenged, and men and women alike will let me know I’m out of line. After all, good girls should be seen and not heard…

Which brings me to the seemingly harmless cousin of this kind of male commentary, “cat calling,” as it is so cutely dubbed. When I worked in Manhattan, I was the recipient of some form of cat calling on a daily basis, simply by walking from the subway to my midtown building. If I challenged the calls of “Hey sweetheart” or the “Give me a smile” commands in any fashion beyond the prescribed return smile, the tone changed from pseudo-friendly to one of anger (”Don’t be such a bitch” or “Suck my dick”) that was meant to punish me for not playing along.

This abuse of the first amendment carries with it a very real imminent, albeit mostly undiscussed, threat that, I fear, only some men are able to imagine and sense. It is this kind of free speech that collects payment from women. I mean, how many women typically cat call? How many women physically threaten men? I’m certain there are exceptions, but overall, it is women who learn to put on a street face if they don’t want to be bothered. It is women who learn not to respond to the baiting that happens every few blocks. It is women who will walk a block out of the way if they know there is a construction site nearby. It is women who are conditioned to restrict their own mobility on the streets.

I know I am not alone in such behavior. And yes, after growing up in Georgia, roaming the woods and neighborhood freely under the guise of boyhood (I was a tomboy), I admit, I resent not being able to set out in the name of adventure down certain streets. I don’t like that travelling alone on a train or bus marks me as a target for strange men to approach me with seedy or not-so-seedy-but-unwelcomed requests. And here’s a second yes: I do have male friends. I’m not a man-hater. I hate specific, costly behaviors.

Unfortunately, I believe it is the innocent-enough perpetuation of the mentality that “boys will be boys” that Roeper exercises above that leads to more dangerous behaviors. To be “superficial, shallow, and sexist,” as Roeper touts, means he has the license to ignore the possible implications of his statement, he can forgo empathy, and he can gleefully ride the wave of his unexamined designs for the world-as-he-desires-it — because, as he boasts, “I’m a man.”

And who am I to challenge that?