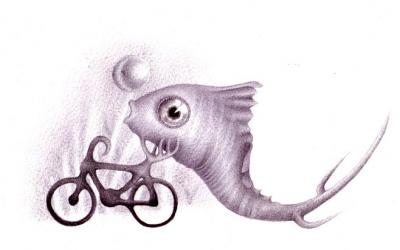 Thanks to Lars Palm for yesterday’s challenge (in the comments below). The real story of the fish on a bicycle is an adaptation from Irina Dunn by Gloria Steinem. This poem after Creeley’s “Old Story” incredibly just came to me, which makes me happy since I usually spend awhile working for a first draft. I hope to see more Creeley tributes and I hope you enjoy!

from The Diary of a Bathroom Door

One razorfish and fishing bowl don’t agree.
So they dipped the hook in hole, hell,
with a here and now not every
now and then, see. Me, I bent
a hand whenever it swam
but I was sliced, sliced, sliced.
You got a fin, girl, wing it.
You got a fish, girl, bike it.

P.S.!! Check this out: I feel extremely honored here. Grace Cavalieri (click & scroll to the bottom for her info) included my book, Antidotes for an Alibi, among her “Best Picks Poetry Books of 2005″ at The Montserrat Review. My book is very happy to be in such excellent company!

This entry was posted on Saturday, December 3rd, 2005 at 12:26 am and is filed under Poetry, Books. You can follow any responses to this entry through the RSS 2.0 feed. You can leave a response, or trackback from your own site. Edit this entry.

3 Responses to “Day Doubling as a Creeley Kind of Day”