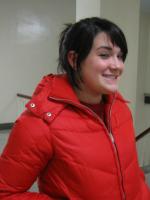 What do you do with a genius student? You publish her work on your blog and count yourself among the first. You publish it even if it’s a first draft. You’re too impatient to wait for the finished product. The semester’s end is a week away, and that’s more than a weekend. I don’t know where I’ll be then. So enjoy now.

We Leave All Over

He had it sitting on the edge of his palm. It was balanced there like an absolutely perfectly-balanced thing. And I am saying, Ben, I do not have the words to tell you what that looks like right now. So Ben smiles. And he takes that balanced thing off of his palm, and he puts it back into his pocket. And he sort of does this thing where he rests his head right in his hand. And he looks so comfortable. And I want to be comfortable like Ben, but I don’t know how to balance anything anywhere.

He tried to teach me once. But I got angry. I told him, Ben, I do not even have the words to show you my anger right now. And Ben smiled.

There are these lights that look like magnets to Ben’s shoulder tops. They are racing right by the train windows. I’m not sure I have the words, but it’s like if someone could spread light around like when you put a glassful of water on a wooden table top. And you like, push the glass across the polished surface, and you see the water get stuck on the shiny parts. It’s like that, only faster over Ben’s shoulders. Like he’s holding light or something. And I want to tell Ben, but I can’t.

I can never tell Ben anything. But I listen when he tells me things.

Like that time he took me to that rooftop, and he asked me to look at that bridge that took those cars somewhere. And everything is supposed to be smaller from high up, but in a way, it still looked enormous. And I kind of wanted to throw up and die there, but in a good way.

He told me stuff then. And I didn’t know what to do with my hands. Here is Ben, and he is actually putting words together to form sentences to save on shelves made out of air that exists right in front of both of us. And he’s telling me things I want to hear about, but all I can think is Should I fold my hands or pretend I have an itch on my collarbone? Maybe I should just completely sit on both hands so I can actually listen to what he is saying. But he’s done before I can decide, and that’s it.

I can spend most of tonight trying to get Ben to say something I want to hear, but it won’t be the same. It’s like that light he has all over his shoulders. It can be repeated but not recreated.

And I kind of guess a lot of things are like that. Like entire years out of your life when you never had to think once about what to do with your hands. Those kinds of things you can’t recreate. Because once big things explode into your little years, you have to think about things like your hands and other things, like what you should do when you see someone who you know, but you don’t really know. I consider waving, but my hands come back into play, so I pretend I don’t see them.

But if Ben were to see people he knew, but not really, he’d probably wave and say hello. Maybe even at the same time.

I have completely forgotten where Ben is taking me on this train. If I don’t wake him up soon, I won’t know where to get off. I can try to ask the conductor, but I don’t know if I’ll be able to make a sentence out of the information I have.

Ben gave me a gift once. It was this book meant for children, but he liked the pictures in it, so he got it for me anyway. And the story goes: there’s this boy who has a stuffed bear. I forget how, but the bear gets lost somehow. And the little boy is upset for awhile, but he makes friends with his new neighbor, and he sort of forgets all about the bear.

I am constantly asking Ben how the little boy managed to forget all about his bear.

I’m getting off the train now. I left Ben asleep in a train seat. This stop is probably wrong, but I can always walk or call a taxi once I realize which direction I need to go in.

Ben said the little boy never forgot completely about his bear. He said he probably thinks about him a lot when he doesn’t know what to do with himself. He said there are parts of ourselves we leave all over, but we never forget completely.

This entry was posted on Friday, December 16th, 2005 at 3:20 pm and is filed under Poetry, Readings, Teaching. You can follow any responses to this entry through the RSS 2.0 feed. You can leave a response, or trackback from your own site. Edit this entry.

5 Responses to “We Leave All Over”