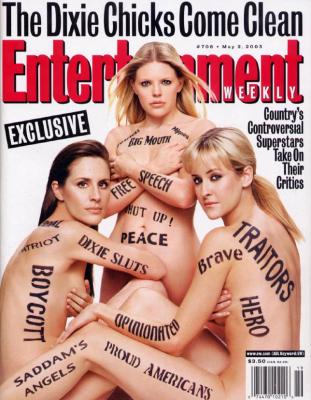 In 2003, Natalie Maines of the now-notorious band, The Dixie Chicks, said some pretty benign stuff about Bush, primarily that she and her bandmates were ashamed that the U.S. president was from their home state of Texas — on the eve of the Iraq invasion. Her remarks led to some heavy-handed response, including FBI-deemed credible death threats and a publicly-organized campaign to damn the band’s cd sales forever.

Maines’ comments rippled through the world of country music, one of the largest genres sold in the world — not just in the U.S. — in a telltale way. How could anyone in country music say something even remotely derogatory about any Republican, especially Bush? Mainstream country music is the popular culture flag for conservatives across the nation. All conservatives and even Democrats publicized their support for Bush when they signed an open-ended check for war that continues to draw on and deplete any future resources we stored up under Clinton’s rule. And so in the face of tremendous flak, the girls apologized and retreated and continue to be maligned.

Now there were all sorts of contradictions involved in this public fiasco, the least being that they were criticized for not supporting the troops in Iraq even while their song, “Travelin’ Soldier” (a romanticized account of serving one’s country in Vietnam and a woman’s recognition of such nobility), was the number one country song in the world at the time. Go figure. And the band’s message may not have been tremendously sophisticated or complex, but it was offered up in the face of huge public scrutiny and at a cost that the Chicks’ production company, I’m certain, abhorred. The song, by the way, dropped to number sixty nine within a week or two, due to patriotic fans calling their radio stations about these traitorous women. That’s the kind of energy that backs Bush.

Now how do we get that kind of immediate mainstream response to the loss of lives, Americans’ and Iraqis’, to date? How do we get people to demand an exit plan? It seems like it might be in all of our best interests, even if we’re “smarter” than mainstream America, to be concerned with public opinion, and even invested in it — especially during this time of war.

And so now, the prodigal daughters have returned after a long period (in the record industry) of downtime with a new album, “Taking the Long Way,” just out today. I have done all things wrong for a sophisticate: this southern girl bought the album online and is waiting to hear what news these Texans have opted for in their latest songs. Something tells me mainstream America may be catching up and the responses might not be so anti-Chick this time around.