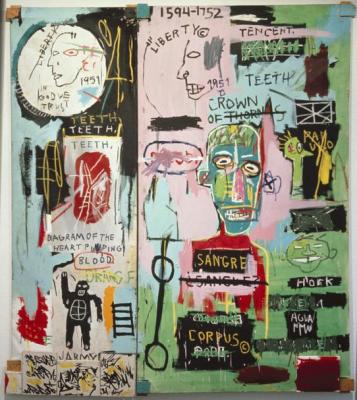 Is it cliché to be a Basquiat fan these days? I don’t hear or see many younger writers noting his work or citing him as an artist they admire. Was he too hip? More legend than artist? Or merely a “graffiti maker” (which he denied vehemently)? Was his style too uneven or messy? Correct me, please. I’d love to know his fan base …

This morning, I’m digging the book I bought myself for Christmas, though it has received mixed reviews as being too similar to the catalog preceding it. I haven’t seen the earlier one, so I couldn’t care less. The essays within are worthwhile, and I’m happy not to have to trek out in this cold & wind to the Brooklyn Museum to re-visit many of his paintings and drawings.

Basquiat led a life of highs and lows; here’s a brief bio & an elaborate one with excellent assorted video clips of the man himself. And hmmm…

For your winter day amusement, an excerpt on the artist’s mechanics from Marc Mayer’s essay, “Basquiat in History”:

…When Basquiat provides his paintings with his inescapable, chattering ground of drawing, as he does in a great number of works, he promotes the traditional role of the preparatory sketch from a preliminary exercise of ratiocination to the ultimate manifestation. His increasing practice of gluing large, single drawings to canvas, moreover, as opposed to building up a ground from smaller drawings, emphasizes his position in this regard.

If we remember how Synthetic Cubist collage attempted to blur the boundaries between art and the world, by reframing actual tokens of modern life into wistful, abstract compositions, we see Basquiat instead preferring to create a hermetically closed system with his analogous procedure. He papers over all other voices but his own, hallucinating total control of his proprietary information as if he were the author of all he transcribed, every diagram, every formula, every cartoon character–even affixing the copyright symbol to countless artifacts of nature and civilization to stress the point–without making any allowances for the real-life look of the world outside his authorized universe. In “correcting” Cubist collage, Basquiat appears to have found the fly in the ointment of modern art, which had set it on its ineluctable death trip: art means never giving reality a chance to speak for itself.

No Responses to “Old Hat Basquiat?”