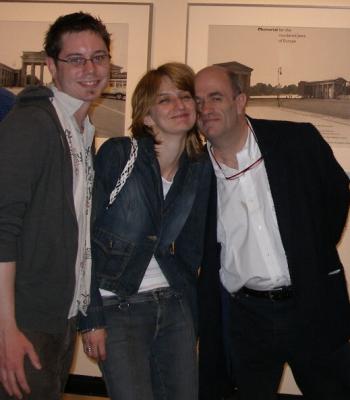 I’ve always liked the Irish. Flirted with the Irish like the one on the right (The Master), though that’s not going anywhere — on either side. Nothing wrong with that …

Even dated an Irish for a small spell – though that might be the last. Still chat with an Irish poet, who is now an American too.

Speaking of the Irish, having just finished a lovely crab cake lunch with my high school teachers, I’ve returned home to crack open The Wake Forest Book of Irish Women’s Poetry (1967 – 2000) to see what nourishment such women might provide. The first one I’ve opened to, Medbh McGuckian, has already floored me (haven’t read past her yet), and so I decided to spend some precious nap time re-typing, not one, not two, but three of her poems out for you (don’t forget, I’m enjoying a brief vacation, gentle reader). I type for you because it’s important to share in this commercial world of ours and because it looks like each author presented has at least twenty poems to read apiece, a substantial amount of work for an anthology (American anthologies often give about five poems, and that’s if you’re a namebrand poet).

There is something to be said for the poet who can appear to write pretty lyric poetry with enough twists and turns that convey a sense of power in the feminine — and unsettle rather than comfort the reader (I’ll also include one about a lover for those who require drama). Strangely, her unsettling does comfort me, and so without further ado, I type out for you (for starters), Medbh McGuckian’s poems (if these are representative of what I can expect in this book, I’ll keep you abreast of further discoveries):

The studied poverty of a moon roof,
The earthenware of dairies cooled by apple trees,
The apple tree that makes the whitest wash …

But I forget names, remembering them wrongly
Where they touch upon another name,
A town in France like a woman’s Christian name.

My childhood is preserved as a nation’s history,
My favourite fairytales the shells
Leased by the hermit crab.

I see my grandmother’s death as a piece of ice,
My mother’s slimness restored to her,
My own key slotted in your door–

Tricks you might guess from this unfastened button,
A pen mislaid, a word misread,
My hair coming down in the middle of a conversation.

Do not be angry if I tell you
Your letter stayed unopened on my table
For several days. If you were friend enough
To believe me, I was about to start writing
At any moment; my mind was savagely made up,
Like a serious sofa moved
Under a north window. My heart, alas,

Is not the calmest of places.
Still it is not my heart that needs replacing:
And my books seem real enough to me,
My disasters, my surrenders, all my loss…
Since I was child enough to forget
That you loathe poetry, you ask for some–
About nature, greenery, insects, and, of course,

The sun–surely that would be to open
An already open window? To celebrate
The impudence of flowers? If I could
Interest you instead in his large, gentle stares,
How his soft shirt is the inside of pleasure
To me, why I must wear white for him,
Imagine he no longer trembles

When I approach, no longer buys me
Flowers for my name day … But I spread
On like a house, I begin to scatter
To a tiny to-and-fro at odds
With the wear on my threshold. Somewhere
A curtain rising wonders where I am,
My books sleep, pretending to forget me.

The Most Emily of All

When you dream wood I dream water.
When you dream boards, or cupboard,
I dream a lake of rain, a race sprung
From the sea. If you call out ‘house’ to me
And I answer ‘library’, you answer me
By the very terms of your asking,
As a sentence clings tighter
Because it makes no sense.

Your light hat with the dark band
Keeps turning up; you pull it right
Down over your head and run the fingers
Of your right hand up and down
In a groove on the door panel. A finger
Going like this into my closed hand
Feels how my line of life turns back
Upon itself, in the kind of twilight
Before the moon is seen.

A verse from a poem by Lermentov
Continually goes round
In my head. A full ten days
Has elapsed since I started my
‘You can go or stay’ letter, increasingly
Without lips like the moon that night,
A repercussive mouth made for nothing,
And used for nothing.
Just let me moisten your dreamwork
With the lower half of the letter,
Till my clove-brown eyes beget a taller blue.

2 Responses to “The Most Emily of All”