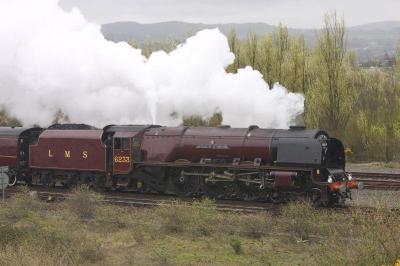 A friend ‘o mine sent the following anecdote from his Irish perch today:

The best and weirdest part of my recent performance tour of Cork (22-24), aside from the yummy rustic Polish fare for 12 euro at an authentic place, took place on the train going back. Happily Irish Rail has trains that have two sets of two seats with a table in between — perfect for the frightening sandwiches they sell or, for someone like myself, fine for the book or the laptop. I had settled myself in when two young men (circa 24) appeared and asked politely if they could sit across from me. Judging from my accent that I was American and therefore rara avis, they began to talk to me. One of them, Shane, was a a gardener somewhere: for him the US was a cultural paradise. He wanted to be a cop because he loved watching COPS; he has an uncle in the LAPD, who had promised him that if he visited, he (Shane) could sit in the squad car. Shane was positive that he would drive it as well. I didn’t want to disillusion him. He also told me with some pride that he had piloted a 747 across the ocean by means of computer simulation — and that he got it right on the 20th try. What happened on 1-19? I asked, and was told cheerfully that the plane had gone in the ocean. At regular intervals, he shared his enthusiasm for US pop culture with me — wasn’t Steve Martin grand? Cheers? Star Trek? Johnny Cash? Etc. His pal (they had only met on the platform sharing a smoke) Declan was 24, and was in college studying “singing and dancing.” Not to be outdone by Shane’s pop culture references, Declan asked me if I had seen Passion of the Christ, which he assured me, was a phenomenal movie. I said, “No,” and he was startled. Why not?” I replied that I didn’t like Mel Gibson’s politics. That big word at the end threw him, and he asked me what I meant. “I’m Jewish, and I wouldn’t go to see a movie where my people are represented as Christ-killers.” He was even more startled. I gather that neither of them had ever met a real live Jew before (the atmosphere was genuinely curious, without a hint of hostility — otherwise I would have become disagreeable myself and/or moved my seat) and the next question was, “Catholics and Jews believe the same things, right?” which caused me to take a very deep breath and explain what I could about the TWO Testaments, the fact that I didn’t think JC was my personal Savior, although all religions believed in basically the same kinds of decency, etc. He accepted all that, but mused more –

“You don’t believe in the Virgin Mary?”

“Not in the Sacred Heart?”

“Ah, if you went into a Dublin pub and said that, they’d kill ya.”

(Laughter and pause on my part.)

“Jews don’t bless themselves or genuflect.”

Pause for incredulity. I truly wonder what they told their butties when they got off the train. Harriet says this was out of Beckett; myself, I aim more for Pinter. The names and details have not been changed – –

2 Responses to “Brief, Benign? Two Fellas Walk Onto a Train…”