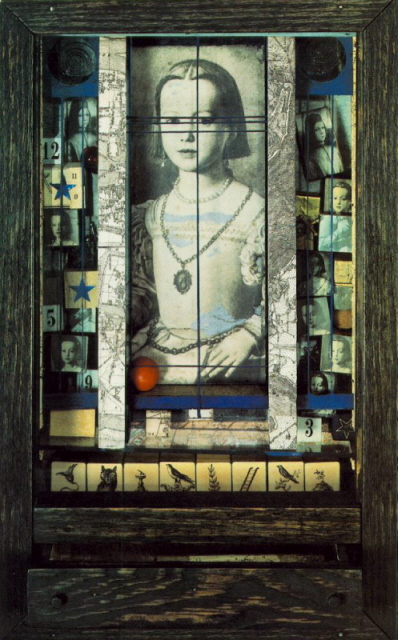 Going back to Barcelona, I will one day. Soon. For the moment, this window of pop fun will make me do.

I thought Nico Case sent this link my way, but it was Nico Vassilakis for all you Vispo people out there.

Visit the new Asian-Amerian issue of MiPO guest edited by Nick Carbo yet?

My first day out, yesterday, after yet another visit to the doc’s, Sara and I went to see the Kiki Smith show at the Whitney (one and a half thumbs up), along with the Picasso side-by-side show, including work by Jasper Johns, Pollock, de Kooning, Lichtenstein, etc — not sure who came up with this comparative-influence theme, but it was fun to play along — and ran into Lee Ranaldo, who was there early to set up for a show he was doing. He’s quite the accessible and friendly guy – except when he heard I am midway through my antibiotics regimen, he took two steps back. All in all, a good first day back on my feet.

Looking for “Self Portrait” poem recommendations (please provide actual copy or a link) — putting together lesson plans for courses. Gah.

Tomaz Salamun is a monster.
Tomaz Salamun is a sphere
rushing through the air.
He lies down in twilight, he swims in twilight.
People and I, we both look at him amazed,
we wish him well, maybe he is a comet.
Maybe he is punishment from the gods,
the boundary stone of the world.
Maybe he is such a speck in the universe
that he will give energy to the planet
when oil, steel, and food run short.
He might only be a hump, his head
should be taken off like a spider’s.
But something would then suck up
Tomaz Salamun, possibly the head.
Possibly he should be pressed between
glass, his photo should be taken.
He should be put in formaldehyde, so children
would look at him as they do at fetuses,
protei, and mermaids.
Next year, he’ll probably be in Hawaii
or in Ljubljana. Doorkeepers will scalp
tickets. People walk barefoot
to the university there. The waves can be
a hundred feet high. The city is fantastic,
shot through with people on the make,
the wind is mild.
But in Ljubljana people say: look!
This is Tomaz Salamun, he went to the store
with his wife Marushka to buy some milk.
He will drink it and this is history.

From a fun collection of interviews, How To Make A Life As A Poet (Soft Skull Press) by Gary Mex Glazner, a metaphor by Kim Addonizio:

I think of it as the difference between an infatuation or a romance and a love affair. The people that are having a romance with writing just want to think of themselves as writers. Their romance is, “Whatever I write is my expression and it is perfect and no one may tread on it.”

But the real interest of writing is the love affair, just like with people. It’s great to have a fling with somebody, but the real interesting thing is when you start to go deeply into love and discover who the other person is. When you hit your own walls and limitations.

The process is endless, this process of psychic excavation. At the same time you are learning about language, learning what other people have done, discovering what you can and can’t do, getting past your own limits as a writer. That for me is the interesing aspect, the real love affair that engages you on every level. That makes you deal with your shit. Writing makes you deal with your shit if you are serious about it. That is where writing gets interesting for me.

–from How To Make A Life As A Poet

Am reading excerpts from a recent gift (thank you, Michael!) of Joseph Cornell’s Theater of the Mind: Selected Diaries, Letters, and Files. Some little blips for you:

HYACINTH – its pungency that once filled the whole lower floor this year the kitchen mainly, & now towards the end of its tenure gratitude to Mother for such a tradition of beauty as she gave us especially now “of flowers” — quince & forsythia about to bloom after a “day” getting out early before this special feeling passes — and the phenomenon of its never heavy but put down in spite of collage (Vale of Hyacinths), Proust, etc.

however, that swing again to opposites–almost two hours up and zest to carry on after stalemate of sleep, gloomy prognostication in phantasmagoria again but not aggressive–prior nights water dreams children generally was the real inspiration first Saturday morning–three pieces in communion with the young helpers

down the cellar starts again the nebulous nature of the influence of Surrealism the nature of it so that someone like Jacques Maritain can come to grips with it, react to it logically affirmatively–

exposure to Surrealism’s philosophy relative to, concern with, the “objet”–a kind of happy marriage with my life-long preoccupation with things. Especially with regard to the past, a futile reminiscence of the Mill notion that everything old is good & valuable –mystical sense of the past –empathy for antiques –nostalgia for old books, period documents, prints, photographs, etc.

–from Joseph Cornell’s Theater of the Mind: Selected Diaries, Letters, and Files