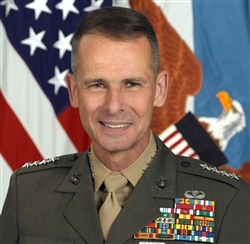 “Homosexuals should relinquish their right to protect our country along with their right to earn a living wage for the able completion of such service. I mean, whenever I think of them doing the ‘do’, I get a funny feeling down deep, below the waist, and then my morals start to burn and ache.”

“General Pace’s comments are outrageous, insensitive and disrespectful to the 65,000 lesbian and gay troops now serving in our armed forces,” the advocacy group Servicemembers Legal Defense Network said in a statement on its Web site.

“I believe homosexual acts between two individuals are immoral and that we should not condone immoral acts,” Pace was quoted as saying in the newspaper interview. “I do not believe the United States is well served by a policy that says it is OK to be immoral in any way.”

In a newspaper interview Monday, Marine Gen. Peter Pace, chairman of the Joint Chiefs of Staff, had likened homosexuality to adultery and said the military should not condone it by allowing gays to serve openly in the armed forces.

Of those who said they were certain that a member of their unit was gay or lesbian, two-thirds did not believe it hurt morale, according to the poll published in December.

–from the Associated Press

Speaking of how to use (& count the troops), killing willy-nilly for big business is totally on the moral highground, yes, Mr. Pace?

9 Responses to “On the Issues”