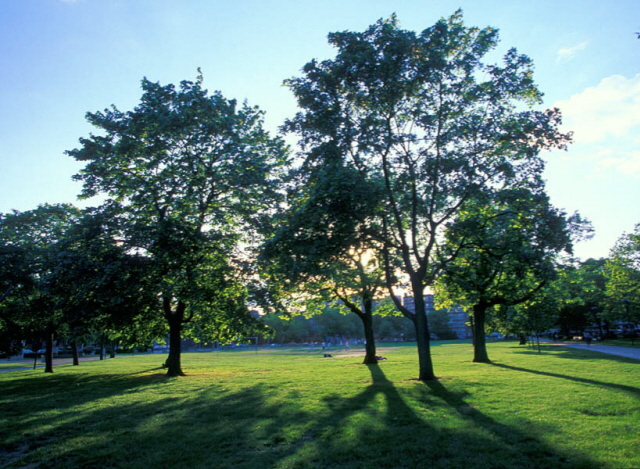 Let’s play more than politics now – and hope that Bloomberg’s proposals, such as the million trees project, will see the light of day. The first tree was just planted a few hours ago in the Bronx, with only 999,999 more to go (by 2017)! Mayor Bloomberg and Bette Midler planted the Carolina Silverbell themselves!

Not so incidentally, major kudos to Ms. Midler for founding the New York Restoration Project on her own dime (or million plus) and for saving more than 51 community gardens in NYC (& boroughs) slated for sale to private buyers, under former Mayor Guiliani’s reign. She also promoted, funded, and participated in the clean up of public parks that had become severely polluted and dangerous. Cheers, Bette!

And now, Mayor Bloomberg follows up:

“Our economy is humming, our fiscal house in in order and our near-term horizon looks bright. If we don’t act now, when?”

* Accelerate the cleanup of 7,600 acres of contaminated sites.
* Provide incentives to building owners to recycle water for non-potable uses like toilet flushing.
* Increase the city’s trees by 1 million.
* Waive the city’s sales tax on hybrid vehicles.
* Provide cleaner, more reliable power by upgrading the energy infrastructure and retiring dirty power plans.
* Add a surcharge to electric bills to finance incentives for retrofitting buildings.
* Promoting bicycling by completing the city’s 1,800-mile bike master plan.
* Eliminating roughly 40% of locally produced soot.
* Reduce greenhouse gas emissions by 30 percent.
* The new building code – which is expected to be adopted this summer – will provide rebates for many environmentally-friendly features such as improved ventilation and white roofs, which reflect heat rather than absorbing it and so reduce energy needed for air conditioning.
* The city plans to offer a property tax abatement for solar installations.

And last, but far from least, the proposed and hotly debated congestion tax. “Under the plan, passenger vehicles entering Manhattan below 86th St. from 6 a.m. to 6 p.m. on weekdays would pay an $8 daily fee. Trucks would pay $21.” I live in Brooklyn, own a car, and take the train into Manhattan on a regular basis. Sometimes though, I drive through to the Holland Tunnel on my way out of town. As a resident, I would happily pay the fee. I view the tax as an encouragement to use our vital and efficient public transportation system that is already in place, and I would like to see more folks using it, residents and out-of-towners alike. Other major cities such as London already pay the tax to their advantage. Bike riders would also find the streets safer. God knows, pedestrians would love to be able to cross on the light without a car bearing down on them to turn. Etc etc. Hope these things come to fruition, fingers crossed …