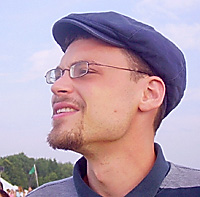 Alexander Dickow reviews my book, I’M THE MAN WHO LOVES YOU, in the most recent issue of Jacket Magazine. A few excerpts:

… King displays her taste for paradox, conceptual knots and conundrums:

[…] I named my dog for the future except
I couldn’t remember what we’d all been calling her by then […].

My own preference for the baroque attracts me to these occasionally excessive verbal ripples and folds (is excess a negative quality?). Only Lautréamont’s contorted syllogisms can compare: they are never opaque, never senseless, but disfigured just enough to provoke a double-take:

What comes now? None of us died
the very moment that so many of us are still alive. … (‘La Vie Quotidienne’)

Amy King’s lexical palette is enormous, but her language remains economical to the extent that it evacuates the flabby redundancies and laziness so common in everyday speech (and in the poets that adopt a related esthetic). King is aware of the artifice at the heart of her poetic idiom, an artifice rare and refreshing in the thoroughly colloquialized landscape of contemporary American poetry. …

… I would suggest King should be read first of all as an unequivocally committed feminist: she often lampoons our inherited 19th-century conceptions of gender (see for instance, ‘This Is an Acting Marriage,’ quoted below, or ‘The Monster Within’). However, if she feminizes the internal storyteller, she by no means exclusively addresses a female audience (in other words, she feminizes your internal storyteller: yes, you). One of the collection’s most persistently recurring motifs is the inherent reversibility or interpenetration (!) of gender and sexuality …

King relentlessly flirts with her reader: eroticism is a privileged mode of interaction between reader and poem:

I know we can live without love from the waist up
and the kind that flows from up above, even horses
that speak our language, but the rest remains
a place we frequent with panty-laced desire and rely upon
for everywhere with bonus scenes as yet in production,
postoperative and pre-season. Like an apricot foam,
the hand that strokes a felt-like rose stem assumes
where it’s moving and when it’s moving in. (‘Mildly Free’)

Here as elsewhere, King’s poetry accomplishes a paradoxical synthesis of the cerebral and the sensual, viscera and intellect, summed up by the expression ‘scientific copulation in / religious veils’ (‘The Marriage of Birthdays’). Sex always involves an ironic ingredient, suggested here, for instance, by subtle comic allusions to the sexually ambiguous, male-and-female rose stem of the Romance of the Rose, not to mention Mr. Ed and Swift’s Utopic land of the Houyhnhnms. Such allusions suggest a sexuality filtered through layers of literary representation, complicated by culture, but no less invested with desire (indeed, all the more so).