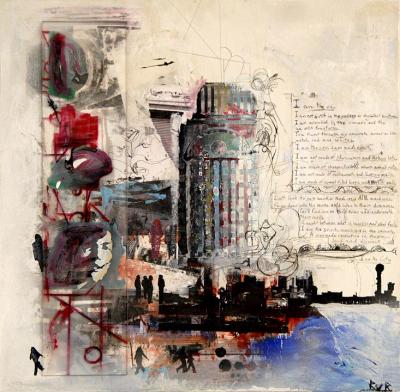 Ross Von Rosenberg – “I Am The City”

I like these two poems, very much, from Arthur Vogelsang’s book, CITIES AND TOWNS.

The final light is the last fur and no animals left.
Listen to me as if you’ll be on earth forever.
Some lamps of the rehabilitated enriched neighborhood
Like six approaching mocking bodies in space
Are ochre, white, sorrel, sulphur blue-white,
Imitation suns of the sun letting go of us
In late winter under a big blue steel bridge
Where the warehouses and their repulsive sidewalks
Have been washed and dried as if they fit in a dishwasher.
Would you listen as if I were gone,
A time from now, but gone,
A time from now, but gone,
And you were around, not to pass on my impression
Of the lamps gathering in a darkening space
Like a round-up of suns in a solar-system prairie
Between the bridge and our building,
Not to pass on my impression
As an immortal impression (pitiful desire),
But I think it would not be too like hell
For you to travel alone by foot through the rare light
Under the obnoxious domineering bridge
Between the phonied buildings where the jobs will never come back.
Listen, I don’t know if everything’s an accident,
A continuing explosion in which the myths of eating and love are beside the point.

On the one hand, the shady side of the house,
The window built of leaves, shifting,
The rooms adequate and cool,
But the other way
The sun in the street flat and finding everyone.
They are very still in it.
A new song about Durango from next door,
They thud when they dance to it,
An American on the tape sings some verses in English,
To tell the moot story,
And sings some verses rawly in Spanish.
People you want in the mega coastal city
To the south and to the north, to be absorbed in them.
The boiling short poems of a student four years ago.
How they do everything better but three hours earlier in L.A.,
Better that the sun is like a wife, and the shade is its husband.
Durango, deep in Mexico.
The appointment rushing near,
The gin and tonics after,
The ache for certain ones never to be known,
Then bed but now the dark to the left the bright to the right.

3 Responses to “Two From CITIES AND TOWNS”