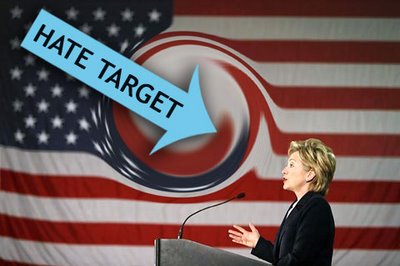 I’m not sure where the “funny” part is, but hey, if it makes Dad feel manly, why not target Hillary one more time for deigning to run for an all-male office? Gasp! Isn’t “President” synonymous with “King”? Women can’t be kings! Except Amy King, of course. Now that’s funny!

Target has come under fire for a Father’s Day card they are selling. The card, according to Hispanas Organized for Political Equality, uses sexist humor that should not be tolerated. The card shows Senator Hillary Clinton and contends that that “having a female president is scarier than having children”.

Target’s answer? “For many years retailers have featured greeting cards which depict the current holders and candidates for the office of President or Vice President of the United States. Target has featured similar greeting cards during several administrations, regardless of political party. I apologize for any disappointment the cards may have caused. Target certainly does not intend to offend our guests with the card assortments we carry. Your comments will be made available in reporting to our buyers.”

Um, except people have told Target it is offensive. How about responding to that?

HOPE appeals, “The issue of sexism crosses party lines. In a society where women make up a growing part of the workforce, make 80% of the buying decisions in the household, and by some estimates, account for 5 trillion dollars worth of purchasing power, there is no room and no excuses for sexism. Viewed by endless Target shoppers, this card is demoralizing and offensive and does not send an empowering message to young women and men. We ask people to contact their local Target Store Manager and make their voice heard by asking for the removal of the sexist cards from its shelves. People are also asked to call Target Guest Relations at (800) 440-0680 to lodge a complaint.“