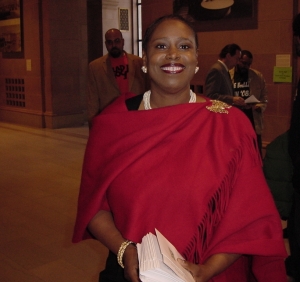 Interview Excerpts below from Democracy Now!

AMY GOODMAN: Let me ask you about a quote of Amiri Baraka, who was very critical of your run. He said the people who are supporting McKinney must know that this is an empty gesture, but too often such people are so pocked with self-congratulatory idealism that they care little or understand little about politics, i.e. the gaining momentum and use of power, but want only to pronounce to themselves mostly how progressive or radical or even revolutionary they are. Your response, Cynthia McKinney?

CYNTHIA McKINNEY: Well, of course, I know Amiri Baraka well, have been to New Jersey to campaign for his son, campaign with him. And so, you know, of course, he is entitled to his opinion, and I respect him greatly. However, I do differ.

As I just discussed, the definition of politics is the authoritative allocation of values in a society. And if a political party no longer or fails to represent my values, then what am I supposed to do? The people of Venezuela voted their values, and they got real substantive exchange. They got their values being implemented in public policy. People in Chile and Argentina, people in Ecuador and Bolivia, people in Haiti, people in Cote d’Ivoire vote their values. People in Mexico voted their values. They had an election that was stolen, but then they shut down Mexico City for five months.

AMY GOODMAN: Will you be campaigning in swing states like Ohio and in Florida that could perhaps have a one or two percentage point difference between the candidates?

CYNTHIA McKINNEY: As I mentioned earlier, we are in a situation where people can go to the polls today and their votes not be counted. We do not have the assurance of election integrity. In a situation where we do not have election integrity, I don’t think it’s possible for anybody to talk about a one or two percentage point difference, when we’ve got the electronic voting machines, we’ve got central tabulation manipulation, we’ve got problems with people even being able to cast their vote. I will go wherever—

AMY GOODMAN: Are you concerned about—

CYNTHIA McKINNEY: I will go wherever there are marginalized, alienated and disenfranchised people who need the voice and the message of the Green Party.

In 1988, McKinney ran for the same seat and won, making the McKinneys the first father and daughter to simultaneously serve in the Georgia state house.

McKinney immediately challenged House rules requiring women to wear dresses by wearing slacks. In 1991, she spoke against the Gulf War, causing many legislators to walk out in protest of her remarks. — From Wikipedia

Click here if you’d like to see Congresswoman McKinney give Donald Rumsfeld a run for his money. Or rather, our money. Really, she’s trying to find out which companies and contractors rec’d gov’t money – you know, that trillion dollar war expenditure that has taken Americans, to start with, into the wells of debt.

AN EXCERPT FROM MCKINNEY’S ACCEPTANCE SPEECH FOR THE GREEN PARTY NOMINATION:

And just like the women and men at the Seneca Falls Convention in 1848 who declared their independence from the Old Order, I celebrated my birthday last year by doing something I had done a dozen times in my head, but had never done publicly: I declared my independence from every bomb dropped, every threat leveled, every civil liberties rollback, every child killed, every veteran maimed, every man tortured, and the national leadership that let this happen. At that pro-peace rally in front of the Pentagon, I noted that nowhere on the Democratic Party’s Congressional Agenda for their first 100 days in the majority was any mention at all of a livable wage, the right of return for Katrina survivors, repealing the Patriot Acts, the Secret Evidence Act, the Military Commissions Act, or bringing our troops home now. Nowhere on the Congressional Democrats’ agenda was an investigation into the Pentagon’s “loss” of $2.3 trillion that Rumsfeld admitted to just before September 11th. And nowhere was there any plan to get that money back for jobs, health care, education, and for veterans. Not even repeal of the Bush tax cuts that have helped to usher in, according to some, levels of income inequality not experienced in this country since the Great Depression. And instead of Articles of Impeachment to hold the criminals accountable, impeachment was taken “off the table.”