I can’t help it.  I keep saying I won’t write this post.  It’s not worth it, I’ll appear rude, my knowledge is limited, etc.  But I’ve decided to put it out there, after a cursory read and setting the book aside in annoyance.  The Gurlesque anthology, GURLESQUE: THE NEW GRRLY, GROTESQUE, BURLESQUE POETICS, by Arielle Greenberg and Lara Glenum, despite including a number of poets I admire and some I count as friends, has sufficiently gotten under my skin today, and to be fair, without giving it more than a few hours’ read.  Perhaps I’ll regret it all and delete this rant later because, truly, I love a good number of the poems within.

What bugs though?  Well in brief, Greenberg in her introduction parallels the Gurlesque with the Riot Grrrl movement.  My memory of that movement, which I peripherally participated in by attending shows and working on a short-lived zine in the Baltimore/DC scene, “Shrill” (& listening to avidly), made efforts to include the queer.  In fact, a large number of those bands were shout-out-loud queer and those that weren’t celebrated various permutations and manifestations of queerness, in fact, relied on it.  This inclusion, I imagine, was predicated on the multi-cultural women’s movement of yore that imagined women who weren’t sexually beholden to men had something to offer. And that’s what’s getting under my skin.  Despite similarities, in part, I don’t see the true parallel to the Gurlesque here.  Content-wise, much of the poetry within this anthology is about straight women dealing directly (and sometimes sideways) with the push-pull of being romantically/sexually-invested in men while simultaneously being under their thumb/the symbolic as well as real power of men — I know several straight women who frustratedly deal with the issues that arise out of their desire for men that goes hand-in-hand with the power those same men hold over their heads.  How does one navigate that?  It’s hard, I know.  I’ve been there. But I’m also somewhere else now, and this anthology doesn’t venture into that kind of experience.  From what I can tell, I guess I don’t write the Gurlesque, nor do any other lesbians/queer women, despite Eileen Myles’ blurbage, “I like these dirty poems.”  Yeah, but where’s the *real* dirt post-not-just-in-relation-to-men, just what are those pink claws and cute guns gonna do (as conjured in another blurb), you know, once the men go to sleep.  What are these riot women going to rock then??  I guess this isn’t *that* kind of book, unless I’m missing it somehow… 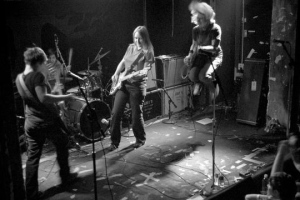 This kind of reactive grotesque (from the “girls'” pens, beholden to Kristeva’s female groteseque) is why “cock” and “cunt” (cock ‘n cunt?) poems get play and other similar ‘fucking men’ pieces sell:  these poems are very much querying and pushing against or into ‘what does it mean to be with men?’ & ‘how do I navigate/subvert/get out from under this mess’ via lots of sexual allusions, metaphors, and straight up physical descriptions, mostly frustrated and grotesque, however symbolic they may be.  These kinds of poems demand reactions/attention because they’re very much about men, & female bodies in relation to men’s bodies, the mechanics and positions of that and how that plays out on the larger levels, through the lenses of women, toying with and reacting to how women are supposed to present/behave for men, etc.  Certainly not all of the poems in the Gurlesque do this, but on my first and second quick read, a good majority of them.  Perhaps, too simplistically from my perspective, is the Gurlesque simply a place for women who fuck men to work out their frustrations and deal with the accompanying power plays?  Oh, and to trying to stop/subvert the conditioning of girls that rears them to be seen as such fuck dolls?  Not that any of these efforts are wrong!  It just feels like the Gurlesque strain in this particular book is claiming to do more (a la the Riot Grrrls), and I really don’t see it.  Yet.

Well, thinking aloud here still, I suppose one could go further and say, gender (esp the hetero-binary) is everywhere and all the poems about penetration and cock sucking and being sexy-lady-fare could also apply to trans/boi/queer relations because some of us use (co-opt?) that language too.  On occasion.  But I dare say, and feel free to correct me, these are mostly if not all straight women dealing with the fallout of fucking men and/or resisting the implications of that desire in a society that positions them as the fucked, on varying levels of course/discourse.  And for that reason, the Gurleseque is not the same as Riot Grrrl (nor do the women included in the anthology “not belong to any clubs that blah blah blah”, as Greenberg claims).  Lara Glenum claims the Gurlesque is descriptive of a moment, something they observed:

‘The Gurlesque describes an emerging field of female artists who, taking a page form the historical burlesque, perform their femininity in a campy or overtly mocking way. Their work assaults the norms of acceptable female behavior by irreverently deploying gender stereotypes to subversive ends. The theoretical tangents germane to the Gurlesque that I’m exploring in my critical writing include burlesque and camp, girly kitsch, and performance of the female grotesque.”

Huh.  I suppose there aren’t many/any lesbian or female/femme-queer poets writing stuff that fits that particular bill?  What would that be even?  Do we know anything about pleasure beyond being in relation to men?  Based on the rampant physicality in these poems:  Pussy on pussy?  Cunt to cunt?  Boobs buoyed by female sinew?  I’m a thigh and eye woman, hear me roar?  Okay, now I’m just fucking around and denigrating the Gurlesque, sorry.  But somehow this whole Gurlesque scene conjures the Alison Bechdel test for films that try to reach beyond the mainstream/status quo / structure:  1. It has to have at least two women in it  2. Who talk to each other  3. About something besides a man.   Achoo.  To be fair, I did spot some poems about girls doing girl things like hopscotch and one about  a granny.  And someone pointed at a literary history via Woolf briefly.  But if you’re going to conjure the Riot Grrrl movement, give me something to get fired up about!  Because I’ve been there (the hetero-“lockdown”), done that and am just not as invested in direct rupture from male-on-female-play-as-we-know it.  I live post-that investment now, so to speak.  I’m in a privileged position, and I think that’s something worth inquiring about.  Just my initial two interrogative (reductive?) cents; I’m ready to be schooled, so fire away.

Additional reading on the Gurlesque

Lemonhound – “Are we buying the Gurlesque?”

The Original Gurlesque – Some Debate

On deck – Just getting into Feminaissance, and so far, digging it.  Also, A Decade of Negative Thinking has arrived on shore.

P.S.  Coincidentally, The Runaways anesthetizes the queer dyke right out of Joan Jett’s story, apparently.  Makes the film into a Little Debbie snack cake.  Scoop from Susie Bright:  “I’ll tell you why dyke rock’n’roll legacy is important. Because in order to stand up to the shitheads who tried to keep young women out of EVERYTHING, you had to NOT GIVE A SHIT ABOUT THEIR SEXUAL APPROVAL.”