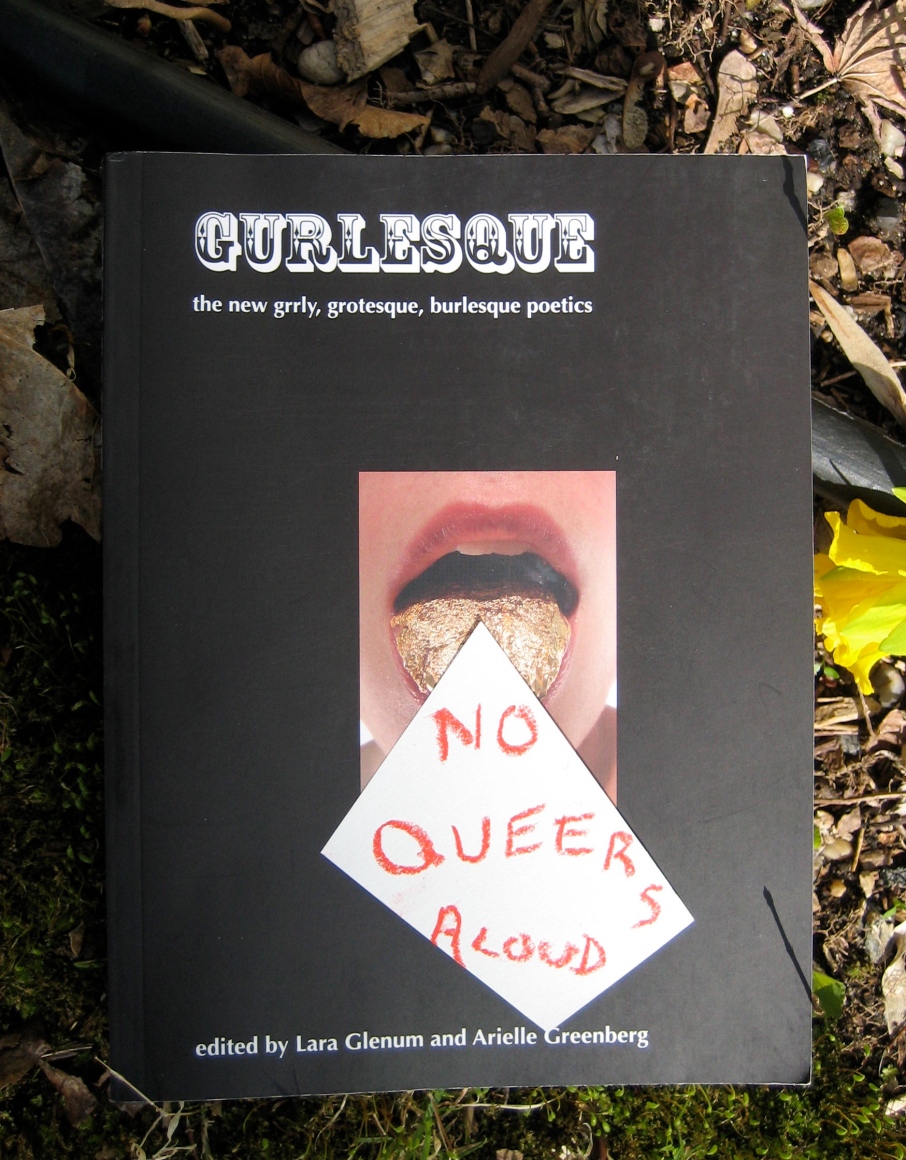 Over the past few days, there has been a flurry of recent debate on the Gurlesque (see my post below). Numerous contradictions, conflations, and confusions abound, coupled with not a lot of resolution or agreement regarding what has cumulatively “taken place” vis a vis the book itself (Ana Bozicevic touches on this in her guest-post below). So I’m here to offer my final impression of the anthology, GURLESQUE: THE NEW GRRLY, GROTESQUE, BURLESQUE POETICS, edited by Lara Glenum and Arielle Greenberg, with the hope that future editions of the book, should there be any, will remedy what I consider to be a problematic omission that ultimately limits the project of the Gurlesque.

I did not originally pay much attention to previous discussions of the Gurlesque before I finally encountered the anthology last week. No card-carrying member to any specific school of poetics, I was sideways-curious, but not invested in defining, describing, or “mapping” the concept. I do not write the Gurlesque, especially as it has now come to be defined through the book (more on that shortly). I did, however, register that the theoretical explorations relied heavily on the language of queer and surrealist investigations and performance theory. When the anthology arrived in the mail, I read through the editors’ introductions and took note:

Greenberg, excerpted: “Some only do it [write the Gurlesque] now and then.”

“…women were writing … the female body and of sexuality…” [sexualities? or exclusively heterosexual?]

“…some grrrls wrote words like ‘bitch’ and ‘cunt’ and ‘dyke’ on themselves…” [Where are the dykes?]

“Clitoral [instead of seminal] to the Gurlesque is Playing with (Fucking with) the Girly.”

Glenum, excerpted: “…neither men nor women but ‘creatures of an alien sex, parodying both.”

“There is no actual self, only the performance of self.”

“…Gurlesque poets put the unabashed quest for female pleasure at the center of their poetics.” [heterosexual pleasure only?]

“…Gurlesque poets, who insist on the multiple pleasures of female embodiment.” [“multiple”]

Many queer women, and what they practice/enact, are invoked to substantiate the Gurlesque: Judith Butler, Susan Sontag, Gertrude Stein [“insistence on female pleasure”], Djuna Barnes [her “baroque eroticism”], Elsa von Freytag, Riot Grrrls [a consciously queer-inclusive group], Kathy Acker, Dodie Bellamy [‘reads as Gurlesque’ to Glenum, but her work is not included in the book], Judith Halberstam, etc. There is also much talk of “camp” (a well-known performance mode originating in gay culture), gender performance (a la lesbian theorist, Butler), and other queer-originated concepts; these prepare one for the inclusion of “queering” from a queer perspective as well as a heterosexual one.

To boot, such abundant referencing, and the use of much queer theory, primed me to turn pages and find a variety of lenses to see through, but what I found did not reflect the set-up. I discovered instead what Glenum now calls, post-book publication (see comment below), “By embrace, I mean a very specific, physical embrace. The embrace of the cock. Of a field of cocks. As a performative mode.” I somehow imagined that the Gurlesque did more, that it also sought out and celebrated Greenberg’s “clitoral” (a variety of female pleasures and sexualities) through the hyperbolic, grotesque, camp, through the gaudy and baroque, together and apart, sexually and otherwise. The queer celebration of such has always been an ‘in your face’ challenge demanding that one process female sexualities, across the board, in unheard of ways, extending through and beyond heterosexuality, ways mainstream and status quo thinking delimits but cannot, ultimately, ignore (see Gaga below). Greenberg’s and Glenum’s introductions did not prepare me for the limited hetero-focus of the book, despite Glenum’s note that, “The anthology itself is a larger description.” In fact, where the introductions promise a multitude and variety, I found the book’s contents narrowed considerably.

In one exchange on Johannes Goransson’s blog, Exoskeleton, Glenum tacks on at the end of a post, “Lady Gaga, of course, is Gurlesque.” If Gaga is Gurlesque, then there is hope, though I don’t see it played out in the anthology. Lady Gaga enacts some of what I imagined the Gurlesque could do: she enjoys the obvious overt destruction/subjugation of the cock, but she also revels in the erotic of the queer and, in some cases, uses the grotesque clitoral as motivation for liberation from said “cock” and its lockdown structures (see “Bad Romance”) as well as moving into various sexualities and sexual modes: enjoyment and celebration of that clitoral by any means necessary (violence, parody, etc – view “Telephone” and see Tamiko Beyer’s “You Bring Out the Gaga in Me” for more). This spectrum of possibility eludes the contents of the Gurlesque anthology, especially as it relates to the elevation of the “clitoral”, a fact that truly left me, as a queer woman, feeling impotent (i.e. men can stroke it but we’re just escaping/evading it… ? When do we get to play with, amp up, and love the clitoral? Does the Gurlesque not?).

The problem is that the “performance of self” found in this book is really, simply put, an anthologized “constellation” of mostly hetero-selves and little girl culture.  It is recognizable and I did not locate Glenum’s aforementioned “alien” parody within.  In fact, I’d dub what’s in the book, “Straight Eye for the Straight Guy” (how different the original Queer Eye TV show would be if only hetero-women were “making” men over). The lack of queer poems, ones that are as harsh and grinding and do power ‘fucking’ as say Ariana Reines’ “Blowhole” (“…then the cock slid in and no sound come out, only a maw gaping, grind hard into ground.“), Catherine Wagner’s “from White Man Poems” (“His anus smells like an old dollar bill…”), or Danielle Pafunda’s “Fable” (“When he was mine, I’d milk him.”). I like this kind of fucking, but want to see where else it can lead, what else it can mean.

In earlier debate, I noted that it is not my responsibility, but the editors’ to consciously seek out poems that represent the work of queer women’s sensibilities in the book. Having done just a cursory internet search, I located several powerful examples that embody what I’m referring to: Tamiko Beyer’s “Our Lady of the Gaga Gives Us Our Excesses” (“Christina said: I didn’t know if it / was a man or a woman… you want it –/ my cunt-fist-fame /darling god and darling gays / all the world shudders /my body my body my body my fist / my fame a fist my dick a fist”), Trish Salah’s “to blank, your name” (“to know last summer’s corpse or intuitive / shift, politely from a girl with the empire (waist) II / arousing skritti politti fagginess, simmering / a halter toss slam,”), Betsy Wheeler’s “Compartment for Homecoming”, kathryn l. pringle’s “[obscenity for the advancement of poetry: 4]”, as well as in, possibly, work by Brenda Iijima and Stacy Szymaszek, Metta Sama, R. Erica Doyle, Michelle Tea, Daphne Gottlieb, Megan Volpert, Tisa Bryant, Rachel Zolf, Erika Kaufman, Staceyann Chin, and others on this list (click here). With a little research, I’m sure any editor could find that many have enlisted Glenum’s outlined burlesque/grotesque through a queer lens, working through and beyond the framework of the cock. The inclusion of such work should have been ample and obvious, not a quest of wishful hunting, especially as the alignments to queer culture allude to such inclusion (& queer women are also the “women” noted in the editors’ introductions, no?).

If I can locate such examples in such a short period, why did the editors not seek out and include work that extends beyond the primarily hetero-lens of these performed selves as represented? We’ve now been told that the Gurlesque simply “queers heterosexuality” and “Queer poetics turn away from the pathology of the hetero, and that is a very excellent thing. Gurlesque poetics embrace and interrogate the pathology.” I don’t know if Glenum still stands by this last claim, but if she does, then she has not only defined and limited the Gurlesque project itself, but she has also, in one fell swoop, declared just what queer poets do: “turn away from the pathology of the hetero,” which disproves her most recent description of the fluidity of identity and essentializes gender performance, etc. Such claims are in bad form and are very much about defining, though the editors stick to the notion that they are simply “mapping” what has happened. In my estimation, actions via editing, have proven this most recent cock-focus exclusivity true.

The narrowness of this primarily hetero-lens makes this project feel reactive, overall, rather than transgressive or rendering visible/birthing the “alien,” as I imagined it would. If we’re just “embracing” or mocking the cock, we’re not owning and re-vamping the cock (& by default, undoing/re-defining it), something queer women work hard to do deliberately. Queer women’s work also elevates Greenberg’s “clitoral,” whereas the poems within the book do seem to try to mostly engage (Glenum’s “physical embrace” of the cock) and “take back” from the cock. I don’t see enough of Stein’s insistence on female pleasure or Barnes’ “baroque eroticism” or Gaga’s elevation of the female, post-liberation/escape.

I like and enjoy the work of many poets included. To be fair, there are a couple of poems that come close to what I’m thirsting for such as Brenda Coultas’ “Dream Life in a Case of Transvestism” and Tina Brown Celona’s “Sunday Morning Cunt Poem,” but these are very few (see poems cited & linked above for examples that fit into the book’s introductory definitions/”descriptions”), and overall, the book will ultimately prove cathartic and inspiring for heterosexual women, despite the theoretically-queer ascendency it stems from. Glenum and Greenberg could have easily broadened the anthology’s scope and pointed towards more potential and possibility by including queer-lensed poems, *in dialogue*, with what’s already there. As it stands, I was thoroughly disappointed by the lack. Reading through felt like business-as-usual: the heterosexual, even when “queering”, was the dominant lens (esp as it sees solely in relation to the cock), whereas queer work is okay for appropriation, but the unadulterated, bold queer requires its own ghettoized anthology if we are to lay any claim to the Gurlesque at all, a fracturing project that would also, ultimately, not be constructive. Turning to my own work now, I say, “Too bad,” with hope that future “constellations” of the Gurlesque broaden the scope and possibility of what is truly happening by including a variety of female representations, in their multiple pleasures, personas, and performances, across the board.