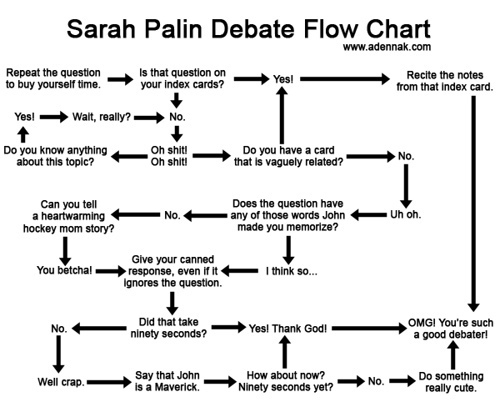 BETTER THAN, AND AKIN TO, THE V.P. DEBATE [Here]

It was an unfair attack on the verbiage
That Senator McCain chose to use,
Because the fundamentals,
As he was having to explain afterwards,
He means our workforce.
He means the ingenuity of the American.
And of course that is strong,
And that is the foundation of our economy.
So that was an unfair attack there,
Again based on verbiage.

Telling it so simple, so far away,
as this America, home of the free,
colored ashes smeared on the base
or pedestal that flourishes ways of doubting
to be graceful, wave a slender hand…

We are fleet and persecuting
as hawks or crows.
We suffer for the lies we told, not wanting to
yet cupped in the wristlock of grace,
teenage Borgias or Gonzagas,
gold against gray in bands streaming,
meaning no harm, we never

meant it to, this stream that outpours now
haplessly into the vestibule that awaits.

We have shapes but no power.