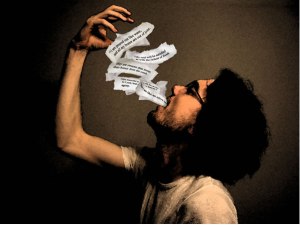 I want my poetry and I want to eat too.

I tell my friends I think about death all the time.  It is the one certainty we know, for we are not even required to continue one breath after this one right now, and that strikes me as the most absurd thing I know. And don’t know. I don’t know death, but every fiber tells me I will end and to sidestep that fact every chance I get: survival instinct in the face of the one certainty that tells us nothing.  Hence death gives, among other things, urgency and an imperative to live as I see fit, not as others require.  This is, as they say, the only life – so why should I do what others want?  Why shouldn’t I implore? my mother to save herself – her final years for herself – when she stands daily wearing a shit-eating grin at Walmart for minimum wage?

I brag to my friends that I am a “minor prepper.” When the next storm hits, I have enough food, wood, books and shelter to invite a friend or two to sit comfy for a month of lockdowns. But I dislike the way real preppers go all Doomsday-ish, that their final equation involves how we will kill each other over the last morsel in the bunker, the final atom of oxygen in the tank, the last tree of life. They clean bullets from Walmart’s shelves and plywood their views in case of starving zombie-humans. I would rather not chart the movements of debased unicorns and have seen enough of burning towers, citywide blackouts and storm-sacked towns to know that folks, at least in this first-world region, come together in real Kumbaya-style when the chips are down, no joke.

But the impulse that works to bring us together in times of crisis seems to belong to the same drift that issues silent edicts and polices our days called the “status quo.” We are locked in, in ways we can’t even stand up high on an airplane and see.  We, at bare minimum, are forever orbiting the status quo just to make a living. So I obsess over Tiny House blog posts, think about van living, and fantasize about growing on the grid Thoreau-style. In my fourth decade on this blue orb, I want more time to read, to write, to commune with people and, after mostly city living beyond my growing up years, to get closer to entities that grow beyond buildings again for I am nature too.  But I give in to what it means to navigate and compromise status quo requirements to live otherwise. My life is a series of decisions based in temptations (how much cyborg am I willing to go? What’s the next tech window to the world?) and necessity (how much work must I do for rent and food?) , decisions that might be framed in terms of Lauren Berlant’s concept of “cruel optimism”: “…one of optimism’s ordinary pleasures is to induce conventionality, that place where appetites find a shape in the predictable comforts of the good-life genres that a person or a world has seen fit to formulate.”

So when I turn to poetry, I want it to find ways of thinking beyond what I know. And I want others to witness them so that I may not be alone. Insofar as religion promises alternatives to suffering and conditioning to unnecessary materials post-Death, I want poetry to locate something atypical while we’re still here.  That is, I do not expect poetry to provide solutions to my immediate material conditions, but I do hope it enables unusual ways of thinking, ones that allow me to make connections where I can’t see them.  Muriel Rukeyser suggests, in Life of Poetry, that truth is “not a stream that flows from a source, but an agreement of components. In a poem, these components are, not the words or images, but the relation between the words and images.”  It is not just what poetry can reference that stands out, but new configurations of relations outside of a social-psychic world determined by capital.  Rukeyser preferred converging systems of thought at risk of failure over constructing epiphanies and replicating certainties within closed disciplines: “Poets and scientists give themselves closely to the creation and description of systems.” The systems, like poetics forms, are not static nor exclusive. An apostrophe may also be an ode or lament, sonnets have proven ten times over how much a form may change for its content and purpose, and many well known physicists thirst for and delve into the arts like Michio Kaku and Albert Einstein.  Likewise, systems of thought may be fluid and overlap so that Kaku can imagine the ways in which we might meet ourselves in 11 dimensions and what we might do when time collapses. The imaginative is not simply about the means to getting from A to B or conveying exactly what A is but touches on the shape of the movement of human behavior and thought, a shifting of values and priorities, and even more precariously, what it will feel like to be in that immanent dimension. Systems serve to get us to unchartered territories; they lead us to uncertain ground so that we might discover what else.  The means are not the end.  Poetry can guide us toward what we’ve not conceived yet. And that might be what saves us from a death before we’re dead.

Beyond simply breaking free of the ruts of daily thinking that would have me choose certain clothes for my “style” and move in line with workplace mores to secure the illusion of my obedience and loyalty, I need to explore how poetry is a way to conjure what I have not yet imagined – in alchemical fashion – regardless of my own intent when writing.  Charles Simic suggests that, “In poetry, life’s ambiguities are worth more than what can be explained. They cause poems to be written. The true poet, one might say, gropes in the dark.”  Taking Simic’s proposition further, the poetry I want highlights those ambiguities, positions them in unusual relations (think of a Joseph Cornell box, a Remedios Varo painting or a Carrie Mae Weems photograph), and plunders their now-multiplied and contrasting darknesses, to nearly perverse dimensions for the discovery of new layers and to locate what else might emerge (now they say black holes sing and are brighter than we thought!).  What the poet emerges with should also surprise and delight or jolt, even if it is dark matter or that which can consume us – or already does, so that we might see it from another angle or frame.  As I’ve noted in a recent poem, ”There is no such thing as fate, only the stories of fate.”

We all love Samuel Beckett’s oft-quoted dictum, “Fail again. Fail better.” But in this culture where notions of survival are forced to shift from the monetary out of sheer necessity, where the middle class finds itself on food stamps and working seventy-hour weeks for 1970s wages without the cost of living interest increases, Beckett’s “fail better” provokes questions and demands explorations. That is why I need a poetry that will carry me beyond decrees of art for the sake of aesthetics; I need systems of thought unafraid to collude with each other and that enable me to eschew my conditioning so that I can open my brain to seek and expect the unusual, to value differently than I have been told, to matter in ways I’ve been told are trivial and useless. Further in Westward Ho, Beckett goes on, “Know better now. Unknown better now. Know only no out of. No knowing how know only no out of” and so on.  Beckett is not about success in the way we know it through perseverance and attainment.  His thrust encourages a meta-knowing, what does it mean to know? What does “better” mean?  Onward.  Elsewhere in Beckett-land, Godot never arrives to satiate the audience because there is a death that means we miss the rest and forget to look in crevices, under rocks and in the mysteries Pandora keeps tied up in the head that is her box.

So full circle, I am back to the point of knowing that no matter my preparations, I cannot stave off the one certainty of death. But as a complicit (and often unwitting) member of the “status” that makes up the quo, I am compelled enough now to try to shift the morphing tyranny of the norm away from its own false stasis and the mythology of its booby-trapped sales pitch of superiority, complete with the laborious drive to meet the standards for the success of a prescribed “good life.” I want to shift it and punch holes in it and let the dark light in.  Poetry is one of my light sabers.  Likewise Karl Popper, one of Ludwig Wittgenstein’s most prominent sparring partners, noted, “It is his intuition, his mystical insight into the nature of things, rather than his reasoning, which makes him a great scientist.”  Poet Muriel Rukeyser might cause Popper unrest by crossing systems of thought, “The world of the poet is the scientist’s world” and vice versa, thus allowing the poet the same advantage of “mystical insight” that Popper bestows upon the scientist in his explorations for discovery.  In that delimiting, I find myself heartened by poets who also cross over without apology, poets like Susan Howe, whose delving into omitted histories and the minds of philosophers and scientists, stand as examples to do it all, no matter what taboos might demand that we keep off this or that grass.  So the spectrum of poetics is also a collapsed one, where time doesn’t inflate and spread us apart. Wormholes allow us access to disparate worlds of poetries so that we can pick and choose what aspects will build each engine that carries us elsewhere. I don’t believe in having to choose the “either / or” of specifics schools, of rendering sentiment only or strict epiphanies any more than I accept the narrowly focused recent trends of the academic avant-garde that include the fetishization of strict technique at the exclusion of other options in our poetics toolbox.  A riskier approach doesn’t need to sell itself as a thing of beauty or a glib sensationalized product; the worthier options tap the poet’s intuition, utilize the toolbox as much or as minimally as each effort suggests, and connect ruptures for the very reason that the result will not be a canned, predictable result and will be, most importantly, unfathomable as we focus on the details and how they relate instead of how we will package and sell our final outcomes. The only certainty of these poetic explorations is that each will finally end, but the risks we take before then are what will, as Rukeyser notes, ‘prepare us for thought.’